The Three Ts and One JR behind Stanley’s Cup 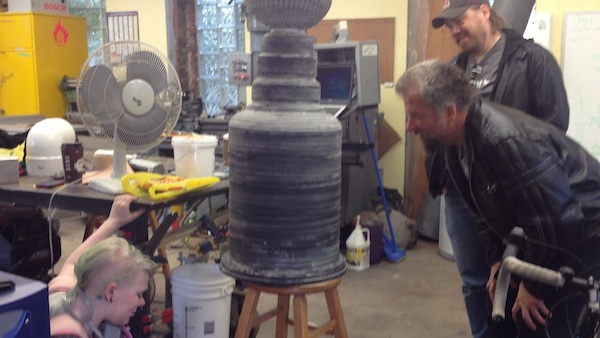 So Trevor Cameron texted Teri Armitage one day which he almost never does because she might text him back and he goes, “Hey! After being nominated for four Gemini awards and only winning two of them, I want to do this CBC ComedyCoup thing with you and Torin Stefanson. Remember that idea we talked about once a long time? I have some thoughts.”

Or something roughly  like that. Point is the 3 Ts have been hanging out and working together for over a decade on a lot of great and great-ish projects including a prescient-in-hindsight show about a rogue mayor who looked a bit like Rob Ford, called IN COUNCIL and the Toronto webfest-winning show MY LUPINE LIFE.

Already an experienced stand-up and improv artist – not to mention dockhand – Trevor Cameron won Geminis for his acting and writing on family comedy series WAPOS BAY where he first worked with Torin Stefanson and Teri Armitage, among others.

Since then Trevor has worked as a creator/writer/showrunner and script doc on numerous other series including CASHING IN and WINTER on the Aboriginal Peoples’ Television Network (APTN). Lots more too.

Now after living and working many places across the country, Trevor makes his home in Toronto, Canada with his wife Jan and their daughter Raven, where family time is spent doing roller derby and skateboarding, dreaming of the day they can get Leafs tickets.

You can read the profile Trevor wrote for himself which he undoubtably likes better  AND watch STANLEY’S CUP teaser after OCTOBER 2 by clicking here.

Listing herself second only because she doesn’t want to post any more photos of herself ever on account of being funny looking OR figure out how to format this text any better,  Teri Armitage is an award-winning-&-almost-winning writer/producer who almost won Leafs tickets for her godsons by entering their Stanley Cup replica into a contest once… only to see their  boyhood dreams crushed in game seven of the Stanley Cup finals. The Lacey boys didn’t make her feel bad about it though and they all had a great time at their annual New Years Day backyard pond all-day  hockey game for which the Lacey Cup is annually awarded.

Other things Teri has almost-but-not won, count the CBC Literary Awards twice, the Streamy Awards once and a few other nominations she would rather forget, like the Kelly Temporary Services’ manual dexterity fastest hands score.

You can read Teri’s other self-written profile and watch STANLEY’S CUP teaser by clicking here.

Torin has been described as a director, a producer, a writer and a designer but by any other name, Torin is the guru and much sought-out Keeper of many, many things creatively awesome and technically excellent from literally hundreds of iOS games and apps to web series and traditional television. Which is super weird on account of growing up in the middle of nowhere, Bankend, Saskatchewan population like, 18.

Torin’s work really needs the whole Internet to describe it. I could list websites, games, shows and awards until I’m blue in the face or you can read his self-written profile and/or watch STANLEY’S CUP by clicking here.

In his spare time and secret other lives, Torin is a Blue Jays baseball savant and dreams of one day hosting a big gaming party at Casa Loma in Toronto.

So that’s the 3Ts. And now introducing, although he needs no introduction from me since I only just met him and he kind of grew up in this business. Although I do know that he is named after Robin Williams which is pretty cool.

Jonathan Robbins has worked on both sides of the camera for 20 years. Currently, he stars in the titular role of the hit web series Out With Dad and will be seen as Uncle Bruce in the upcoming Haphead. On the production side, he has directed dance films and narrative shorts including the award-winning Your Ex-Lover is Dead, and the 60’s conspiracy thriller Sleep Clinic. He has been cinematographer, editor and producer on several notable short films such as the TIFF presented Family First and the Bravo!FACT What You Eat which was acquired by the en Route Network. Jonathan’s first web series, Clutch, has garnered much critical acclaim including being named an Honoree of the Webby Awards, a Streamy nominee, an LA WebFest Grand Prize Winner, and for which he won Best Director at the 2014 Indie Series Awards. He is the story editor for the Italian produced series Wakefield Variations, currently in option by CBS. He Exec Produced, co-directed, co-wrote and edited the spy thriller web series Asset, currently in release. Jonathan serves on the Board of Directors for the IAWTV (International Academy of Web Television) and the IWCC (Independent Web Series Creators of Canada). He is the only person to have ever served on both boards to date.

Watch Jonathan Robbins as Stanley in STANLEY’S CUP teaser by clicking here. And if you like it and/or Jonathan please vote for it.